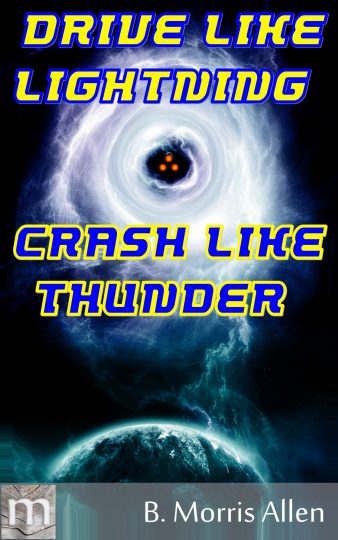 She is a flash of yellow when she drops out of FTL, going .9 c in a sleek ship marred by a tracery of energy-weapon scars.  She is a spray of actinic blue when she crashes through the Engsson barrier at the edge of Norbeq system.  And she is a steady burn of fusion red as she decelerates at tremendous g to allow Norbeqi fast cruisers to catch up and arrest her.

“Who are you?” they ask when the cruisers reach her.  “Why have you come here?” And, most important, “How did you survive deceleration?”

“I am destiny and doom,” she answers when the soldiers let her go.  “I am hope and hatred.  I am trouble and terror.”  When they call for doctors and drugs, she says.  “I am Periphery Scout Anjica Zelnov.  Tend my wounds, and I will tell you about future and fear.”

“We have an anomaly.”

Anjica flipped her seat vertical with a neat kick.  Hours spent mapping the edge of Mechanic space had left her eager for any distraction.  As the ship liked to say, the work was an exhausting mix of tedium and tension – annotating mineral analysis reports while waiting for the alarms that would signal Mechanic presence and a terrifying wait for the faster-than-light drive to charge.  The fact that the scout was unarmed and unarmored only made it worse, though she knew that the Mechanic advantage in speed and maneuverability made weapons a pointless waste of mass.  Scouts relied instead on two advantages – a highly sensitive array of sensors, and the FTL drive.  The Mechanics might be effectively immune to the effects of acceleration, but they could still travel no faster than light – one reason why their rate of expansion could be mapped and predicted.

“Never tire of that joke, do you?” The ship’s voice was the epitome of long-suffering patience.

“It’s what made you what you are.”  Anji’s first words to the ship when she had finished its programming, they had left it with a love for assonance that she had long since given up try to eradicate.  By now, she even liked it.  “What kind of anomaly?  Boring or bastard?”  Most anomalies fell in one of two categories: asteroids with an unusual mineral makeup or new varieties of Mechanic ships.

Anji chuckled.  She had only herself to blame for the ship’s odd sense of humor.

“Communications,” the ship answered.  “We’re receiving long-wave radio communications on a human frequency, but they’re not in a current code.  In fact, I’m not sure it’s a code at all.”

“Really?  Now that is interesting.  You’re sure it’s not a Mechanic transmission?”  Mechanics seemed to eavesdrop on human radio, but rarely used it for their own communications.

“It’s unlikely.  But it will take me some time to understand it.  I may have to decompress the deep archives.”  The ship, naturally, expressed no concern about the prospect of searching and sifting vast amounts of data for pattern matches.

“Do we know where it’s coming from?”  Anjica glanced at the system schematic that had occupied her recent hours.  It showed a few gas giants and a few mineral rich asteroids around an A-type star.  “Surely not from this system.”

“Definitely not.  I’ve been observing and recording the signal since we entered this system, and it definitely originates from further cross-galaxy.  The system is too small to triangulate usefully, but I have a very rough fix.”

Anjica considered.  Her mission was exploration, and this surely fit the bill.

“Right.  Let’s wrap things up here, file the data, and do some proper investigation, beginning with a point of origin.  Start charging the drive.”

The administrative work required was minimal.  She finished her notes, packaged the file, and sat back in her couch.  It would take several hours to charge the FTL drives for a jump to another system, and she needed the time to unwind.

“Hey, Dodger!  Pick out a film for me, would you?  Something exciting.”

“Drama and danger, coming right up.”